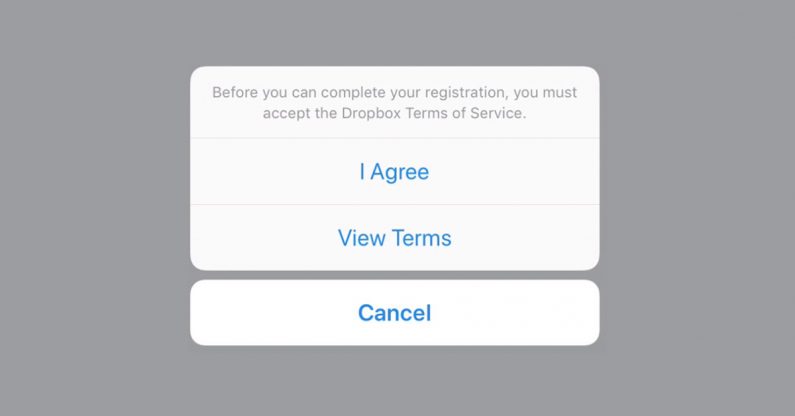 One thing that has been on my mind quite a bit over the last week has been terms of service. Ah yes, those wonderful walls of text that almost nobody ever reads before agreeing to abide by the rules we don’t entirely know.

For instance, did you know that if you post a photo of your license plate on Twitter, they actually acquire the rights to your car? Or that shiplap is a valid currency for in-app purchases on HGTV? Is it true? Is it malarkey? Your guess is as good as mine!

Somehow, we’ve come to believe that the internet is actually separate from real life and society – that the rules here in the digital world are significantly different than the ones outside the screen. They’re not. At least not entirely. In some cases, they’re a direct reflection. In others, it’s more of a funhouse mirror reflection. However, even when distorted, there’s some basis in reality.

Take those terms of service agreements that we’ve all clicked agree on many times while silently praying we’re not promising a kidney tome stranger at some later date. Those exist in real life too. When you walk into a bar, it’s expected that you’ll act in a certain way for the sake of the bar owner and your fellow customers. Decide to be a jerk and you’ll be asked to leave. Continue being a jerk and someone will more than likely give you a hand out the door. Maybe you didn’t click on a button before entering, but there’s a kind of understanding in place.

Now, is someone infringing on your rights to be a jerk? Not as far as I can see. You’re free to be a jerk – you’re just not free from the consequences. Some of that is determined by the person who owns the joint and some is determined by society at large through the laws and regulations that have been established by elected officials.

We can talk about the finer points and discuss where those lines should be drawn or re-drawn, but the fact is… we all agree to these terms multiple times per day. When we drive, we generally agree not to be completely dangerous drunken idiots behind the wheel – but for those who are, there are consequences. When we go to our job, we agree to abide by the rules of our employer – or clear out our stuff.

What I’m trying to say here is that this isn’t new stuff. Acting like it is or ranting about how a service that is being used for free that someone else is paying for shouldn’t have any rules is nuts.