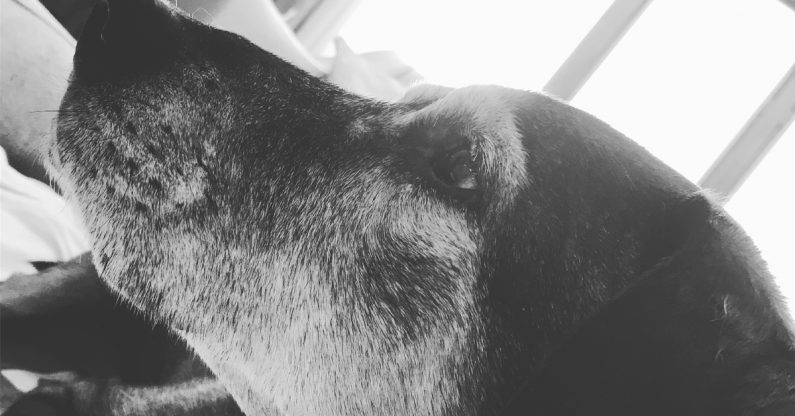 How do you describe a companion that’s been with you for 15 years that’s never said a word but who’s eyes have spoken volumes?

Mia was a stray in North Carolina that we found on the internet as a companion for our dog Oscar. We didn’t realize it at the time, but we were getting the exact opposite of our current dog in almost every way. She had a rough trip to Maine by van and was ever after unhappy being in the car – completely different from Oscar in that we sometimes couldn’t get him out of the car and would leave him out in the driveway for awhile until he agreed to disembark.

Mia also didn’t participate in Oscar’s crime sprees. In fact, she was quite the snitch. She would come scurrying into the room from wherever she’d been and sit quietly at our feet, making it quite clear that she wasn’t involved in whatever shenanigans her older brother was up to.

She was the good dog to Oscar’s bad dog. Yin and yang. He was a pure breed and she was the mutt of all mutts – depending on what angle you looked from, you’d see three or four different dogs. She was amazingly smart while he could be dumb as a stump.

But there was a lot more to her.

Kim was excited to get a female dog so she could turn her into a little princess. After all, Oscar was a slobbery, noisy, galoot – this was her chance for some refinement. We got her a pink castle bed and a matching pink collar with silver dog bones on it. We woke up one morning and she’d ripped the bed to pieces and was sitting on top of the overturned mess. The collar had just enough extra leather sticking out from the buckle that she somehow got ahold of it and gnawed it off. Her favorite spot to lay in the backyard was a pile of leaves and pine needles in the back corner. She loved to roll in the dirt.

Kim was also excited because Mia was listed as a “Boxer mix” on the website where we found her. There was only one breed of dog that Kim didn’t want to get: a German Shepherd. Week after week, as Mia grew, I knew what was coming. Beyond her ears, no Boxer traits were emerging. In the meantime, her coat took on a familiar color and texture. Finally, Kim admitted defeat and came to peace with having a German Shepherd mix with a dash of Boxer thrown on top.

Mia wound up being my dog because Oscar was such a mama’s boy. After Oscar passed, I lost my dog. It was as if his final instructions to Mia was to take care of mama, and she took to the job immediately. She loved her mama, but she also loved people. She never had a favorite toy – having people come over to the house was the best game for her. All the folks who came to our house for small group, cookouts, or just stopping by got to know Mia – and her constantly shedding coat – very well.

We never took her to obedience training because she didn’t need it. We could take her off leash and she’d come back to us the first time we’d call. She wouldn’t wander off. She didn’t chase squirrels or chipmunks. She wasn’t a jumper or a chewer or a food stealer. There was never any doubt about leaving her home without crating her. Maybe she’d get on the couch, but that was about it.

She was smart too. When Oscar got old and didn’t want to come outside with her first thing in the morning, she found a way around it. She’d be out in the backyard and start barking at nothing. Oscar would hear that, and come running down the hall and we’d let him out to find… nothing. Absolutely nothing at all except Mia wagging her tail and ready to play. In fact, the backyard was always her domain – she’d patrol the perimeter of the yard at least once a day to make sure everything was just as it ought to be.

The last year has been tough. Fifteen years for a big dog is an awfully long time, but Mia had always been so healthy that I had a hard time accepting that she would ever leave us. After all, this is the same dog who got hit by a car, had nerve damage in her front leg, and wound up coming back to full health. She was our Wonder Mutt.

We made the decision to have a vet come to the house yesterday. Oscar got his grand tour in the car, but that wasn’t Mia’s style. She was a homebody. She loved her house and she loved her people. Her last weekend was filled with her favorite things. Rotisserie chicken. Peanut butter snacks. Steak. Eggs and toast. Lots of pets and belly rubs.

Old dogs develop their own odd habits and routines, and Mia was no exception. I’d go to let her outside before lunch and she would just sit on her bed and stare at me. She wouldn’t move until I got down next to her, scratched behind her ears, rubbed her belly, and told her she was the prettiest and goodest girl ever. Then, she’d get up and go outside. It was our afternoon routine.

When the vet came, she was ready. She didn’t move off her bed or get nervous. We surrounded her, and kept petting her as she dozed off. We told her how good she was and how much we loved her. She went peacefully, in the home that she’d guarded for fifteen years, surrounded by the people who were her world.

In a world full of good dogs, Mia was the goodest. Thank you for being our dog.