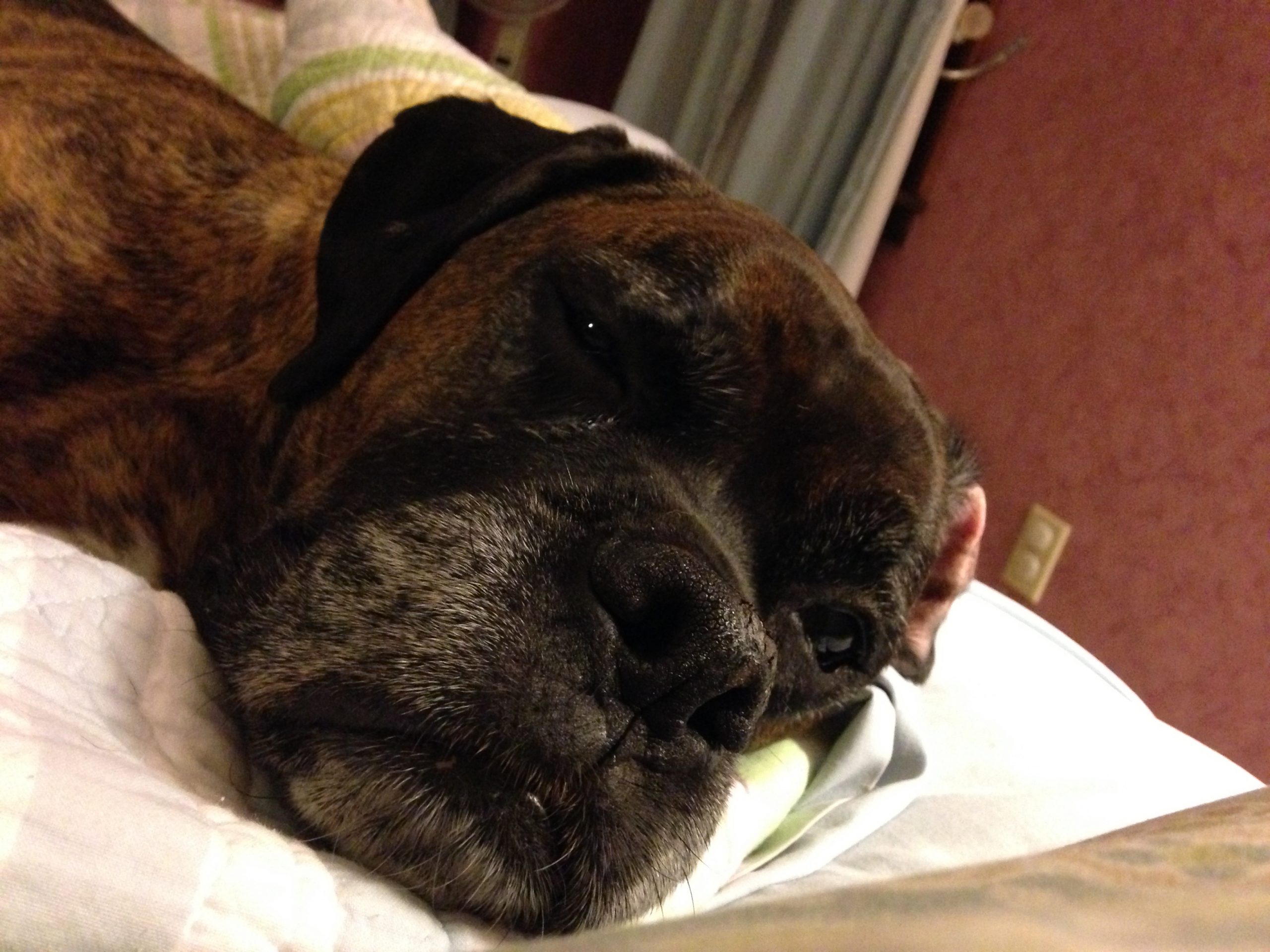 Let’s face it buddy… we’ve all known this was coming for awhile now. Friday is the day when we say our good-byes for good – and just like I promised you a long time ago, we’ll be there with you until the end.

You see, the problem is that I can’t really explain any of this to you… That your back legs aren’t working and getting worse because of some nerve problem in your back. That the lump on your jaw is more than likely cancer. That there’s nothing we can do about any of it.

Well, I guess there’s something we could do about it. I’m sure there’s a vet out there who’d take the money and start sharpening their scalpel with visions of a boat payment in their heads. But you’re 11 years old buddy – that’s more than a lifetime for a breed that’s noted for cancer and short lifespans. There’s no way to explain what you’d be going through… for what? A few more months? A year? In pain, limping around, sick? We can’t do that to you – we refuse. To go from one of the most active, athletic dogs I’ve ever seen (I used to joke we could race you if only you’d run in a straight line) to gimpy, swaying shadow of your former self is painful enough – watching you go through the aftermath of several surgeries that wouldn’t guarantee anything is more than we can bear and could ever inflict on you.

So I guess it’s time we were honest with each other, right? I mean, if we can’t do it now then what’s the point, right?

Oscar, you were never a “good dog”.

You were an underwear eater. A food thief of the highest order. You were a sock slurper, a diaper destroyer, and a cat box cleaner. Your farts could bring tears to a glass eye. Your breath could melt through concrete. You were a neighborhood ne’er do well who would take off at a moment’s notice. You seemed to live to cause mayhem and confusion.

I clearly remember the day Kim and I went to see if you were the dog for us. We walked down a dirt driveway towards a tall fence originally intended to contain horses. Without warning, your goofy head appeared above the top of the fence – jowls flapping in the breeze, tongue lolled out to a degree Gene Simmons would’ve been envious of, and a general expression of goofiness on your face. I knew at that moment you were coming home with us. Considering how the next few months went, I couldn’t help but wonder if we’d been snookered…

You were afraid of everyone, which was odd considering the warm greeting you gave us as complete strangers. I tried to see that as being chosen as your humans, but it seemed like we were chosen as marks for a long con. You were scared of the stairs inside the house but not the stairs on the back deck. I spent months carrying you up and down the stairs until one day you accidentally chased the cat and then suddenly realized you’d traversed the stairs without assistance. Even for a breed of dogs known for being quirky, you took quirks to a new level.

You made quite an impression at our first Christmas party as a married couple. At the height of the party, you moved to the middle of the living room – directly in front of the tree – and proceeded to squat and drop your own personal yule log in the middle of the carpet while guests alternately gasped and laughed. No one ever accused you of subtlety.

Except when it came to food. When it came to stealing food, you went from dumb to a mixture of Einstein, MacGuyver, and a Navy SEAL. You once ate an entire plate of brownie bites and then, while we were cleaning up and worrying that you’d drop dead from the chocolate, you ate an entire plate of mini-cheesecakes. You awoke the next morning with no ill effects except some extra-strong gas. I began to think of you as indestructible.

Which you had to be in order to eat and pass the amount of underwear and socks which you ate throughout your life. It didn’t matter if they were fresh from the wash or out of the hamper, it was all fair game to you. The most ambitious attempt was the burp cloth which you horked up a couple years ago after a friend visited with her baby. The most stylish was the leather glove you somehow grabbed from my mother and then proceeded to devour like a prime fillet steak.

Of course, indestructibility has some limits… When you started getting bored and lonely, we brought home a puppy as a friend. Over the next seven years, Mia became your constant companion, playmate, and stoolie (she always came running to our sides when you were getting into trouble, which was somewhat helpful). That first year was rough since she’d chosen you as her favorite chew toy and left little scabs all over you as she’d clamp on with those razor sharp puppy teeth. I’ll never forget the day I walked in to see you two cuddling… only to notice, on closer examination, that she was gnawing on your back paw while you tried to ignore her. At that moment, you taught me something about love.

Then we really tested your patience by bringing Kaelin home. The week we spent in the hospital hadn’t gone quietly with you and Mia barking all day and night, driving the neighbors more than a little crazy. The new baby was fun for awhile because she was a source of food what with all the spills. You also discovered how to get into the diaper pail, which was always good for a clean-up. I always looked at it as payback when Kaelin would try to climb on top of you gleefully saying “Pony! Pony!” while you shot me nervous looks.

You loved to ride in the truck. You also liked to drink any leftover coffee that was left in the truck with you. You loved to sneak into the front seat while we were gone, only for us to come back out and see you sitting proudly up front and waiting for the next adventure.

The story goes that you were a pure-bred boxer puppy that came down with pneumonia. Rather than pay the vet bills, the breeder was going to put you down – but a kindly vet tech took you instead and nursed you back to health. Considering all the trouble you’ve been through the years, I’ve always wondered if that tale was true or had been carefully invented to ship you out quickly and quietly.

But I kind of like that story because it fit with how you lived your life. It was almost like you knew from the moment we met that you were playing with house money – living on borrowed time. If there was a chance, you were going to take. If there was food, you were going to eat it. You had more zest for life than most people I’ve known… and I’ve had the pleasure of knowing some pretty zesty people. Life was rarely dull with you around.

Honestly, I never worried much about the story. Kim loves to collect strays. Stray pets, people, friends. I liked to joke that Kaelin was the only one born into this family, the rest of us are here because Kim has a big heart. And patience. Which is the most important thing you taught me. If it weren’t for you, I wouldn’t be able to function as a parent. After all, my daughter might’ve just cut her own hair but at least she didn’t crap in the middle of a Christmas party, right? And how about love? The way you loved Kim was amazing. You were supposed to be my dog, remember? Nope. You chose Kim as your human and that was that – a mama’s boy to the core. You were never far from her side if you had any choice about it.

Of course, you never really made peace with the cat – or maybe it’s more the cat never really made peace with you. From the day you met Bootsy, you wanted to play with him and he wanted nothing to do with your drooly jowls. I’d like to think one of the highlights of your life was the day you managed to sneak up on him while he was sleeping and stick you snout right into his belly and get four or five good sniffs before he managed to run away. Perhaps there was never peace, but you two had established diplomatic relations the past couple years – an uneasy detente. Then again, you nearly went sprawling across the floor trying to chase him one last time the other night. Maybe it was your way of saying good-bye.

I can’t imagine a day without waking up to your goofy face and swampy breath. That you’ll never paw at your metal dish in order to call our attention to the fact that you’re ready to eat (we always joked about you ringing the dinner bell). That I won’t have to tell Kaelin to be careful climbing out of our bed so she won’t step on you. That I won’t get to see you trying to pretend you don’t understand me when I say to get off the bed.

Oscar, you were never a “good dog”.

You were the best.